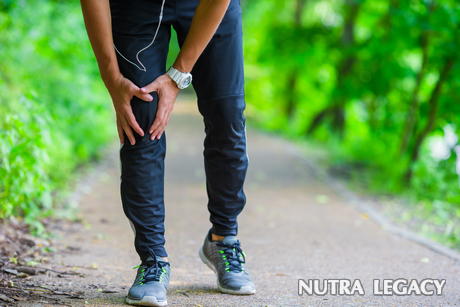 Glucosamine-Chondroitin combines two very popular supplements often taken to improve joint health. Glucosamine is found naturally in the body and consists of an amino acid called glutamine and glucose. It can be found in the shells of crustaceans such as crab, shrimp and lobster. A substance called chitin is drawn from the sea creatures, from which glucosamine can be manufactured in the laboratory.

Glucosamine is an amino sugar. Amino sugars are important elements in oligosaccharides and glycoproteins which contribute to biological recognition. They are also an important precursor of glycosylated lipids and proteins. Glucosamine is often used as a treatment for osteoarthritis. This is largely because glucosamine is a precursor for glycosaminoglycans. Glycosaminoglycans are an important element of the molecules in joint cartilage (the rubbery, elastic material that cushions the joints). Osteoarthritis occurs when cartilage loses its elasticity and becomes stiff. This can result in swelling, pain and loss of movement and can make the joint prone to further deterioration and damage. Dietary supplementation with glucosamine may help treat arthritis largely because it assists in the formation and rebuilding of cartilage and other tissues. Glucosamine supplementation can be effective in the elderly as glucosamine production slows with age. Taking a glucosamine supplement will augment the body’s natural supply. For similar reasons, glucosamine is popular in sports supplementation.

Scientific studies have shown that glucosamine can reduce the pain and symptoms of osteoarthritis in the knee and that it might also slow the deterioration caused by osteoarthritis. Glucosamine is also used to treat inflammatory bowel disease, rheumatoid arthritis, some skin conditions and chronic venous insufficiency although further scientific studies are required.

Research has shown that use of glucosamine in the short-term is well tolerated. Side effects may include headache, insomnia, drowsiness and mild and temporary digestive complaints such as poor appetite, abdominal pain, heartburn, nausea, diarrhea, constipation and vomiting. Combining glucosamine and Chondroitin has also been linked with a temporary elevation in heart rate and blood pressure and with palpitations, but only in rare cases. People with shellfish allergies should avoid glucosamine unless it is from a non-shellfish source. This may not be apparent from the labeling.

Chondroitin is a constituent of molecules called protoglycans. Their role is to provide elasticity in cartilage. Chondroitin is effective because it attracts fluids into protoglycan molecules. These molecules act as a shock absorber between the bones. They also act as a mechanism for attracting nutrients into the cartilage which nourish and lubricate it. Chondroitin is a prominent element in articular cartilage (also known as hyaline cartilage). Articular cartilage is the white, smooth, glistening tissue in the human body that covers the surface of all the diarthrodial joints. It is instrumental in the movement of bones against one another. It is therefore a key element in healthy joints. Chondroitin therefore attracts water to the joint cartilage while glucosamine assists in the formation of proteoglycans. The Proteoglycans then sit in the spaces within the cartilage and act as water retainers.

Chondroitin slows the destructive action of some enzymes which degenerate the cartilage. It is also effective in recovering from and preventing joint related injuries. Side effects of Chondroitin supplementation may include stomach bloating, gas and softened stools.