Coleus Forskolin as Treatment for Allergy, Respiratory and Cardiovascular Diseases 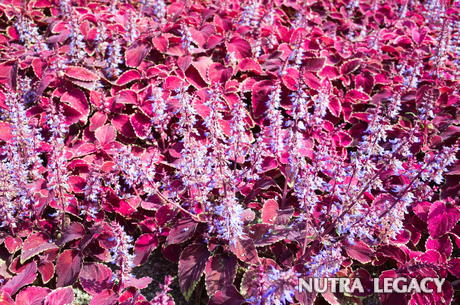 Forskolin is the main active ingredient in the Ayurvedic herb Coleus forskohlii. Coleus is a type of mint, native to Burma, India, Thailand, and parts of Southeast Asia. It has a rich culinary history and is an unusual spice, but it has a more significant role in traditional Indian Ayurvedic medicine. Ayurvedic uses of coleus include application as a treatment for heart conditions and stomach cramps.

The roots of the coleus plants are a good source of forskolin. Forskolin is believed to increase the levels of cyclic adenosine monophosphate (known as cAMP). Raised levels of cAMP have an effect on metabolism that is thought to promote weight loss and stimulate the growth of lean muscle.

The theory behind this effect is that forskolin stimulates adenylate cyclase activity, which, in turn, increases the levels of cAMP in fat cells. This then activates another enzyme called hormone-sensitive lipase, which starts to break down fat stores through a process called lipolysis. The scientific community has yet to prove decisively that these benefits exist, but this is a complex process and is difficult to confirm. Traditional therapists continue to support the relationship between coleus forskolin and weight loss.

Clinical studies have shown that forskolin directly stimulates adenylate cyclase, although it does this without the expected requirement of epinephrine release. This means that forskolin bypasses the negative effects that may result from ephedrine’s stimulatory affect on the adrenal gland. As mentioned above, it is adenylate cyclase that stimulates cAMP, which is the intracellular messenger that triggers the release of the hormone-sensitive lipase that activates lipolysis.

Forskolin may have other benefits too. It has been used to treat systemic conditions like allergies, and may have a positive effect on glaucoma, as well as some respiratory and cardiovascular diseases. Like its weight loss properties, this is a consequence of forskolin’s ability to increase cAMP. The presence of raised levels of cAMP causes platelet reduction. This, in turn, reduces the risk of blood clots, hypertension, and angina, and reduces the release of histamine in allergic reactions. CAMP also improves the relaxation of critical smooth muscle tissue, such as in arteries, thereby further improving circulation. It is important, therefore, that if you are taking other medications that thin the blood, including aspirin, that you consult your doctor before taking any products containing forskolin.

By increasing thyroid activity, increased levels of cAMP have metabolism boosting action. The consequential increase in energy, in turn, also has a positive effect on fat reduction. However, people taking thyroid medications should discuss the potential impact of forskolin and the associated raised levels of cAMP with their doctor.

Other systemic conditions may also be treated with cAMP, including psoriasis, eczema, and asthma.

One Response to “Coleus Forskolin as Treatment for Allergy, Respiratory and Cardiovascular Diseases”