Fo ti root (botanically known as polygonum multiflorum) is a herbal Chinese medicine. Its plant is grown on a large scale in China along with Japan and Taiwan. A member of the buckwheat family, it has a sweet slightly bitter taste. It can be used processed and unprocessed. The unprocessed root is known as white fo ti root and the processed one is known as the red fo ti root. Studies show that the red fo ti root is a lot more effective than the white fo ti root. It is prepared by simply boiling the roots in a special liquid made of black beans. Its recommended dosage is 2 to 3 capsules taken with water at mealtime twice a day or as directed by the doctor. 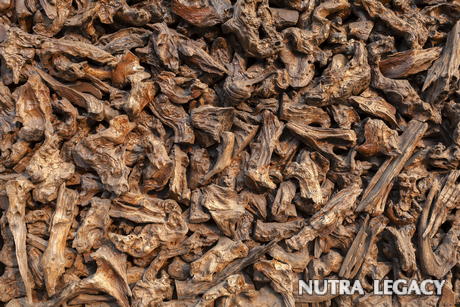 Fo ti root is commonly known as He Shou Wu in China. He Shou Wu was the name of a Chinese legend who in the beginning couldn’t become a father and surprisingly after the regular use of fo ti root not only was his infertility cured but at the age of 50 his grey hair turned black again. In addition to that he also lived a long healthy life and so it’s assumed in Chinese studies that this magical herb also helps to promote longevity.

Not only does it help to produce fertility, prolong life and restore vitality, it has numerous other benefits too. It is believed that fo ti root as a dietary supplement is helpful in treating high blood pressure, lowering cholesterol level and decreasing blood sugar as well. It can also reduce the risk of arteriosclerosis (hardening of arteries) which ultimately prevents strokes and heart attacks. Fo ti root also produces red blood cells which are very important for our body.

Regular use of this herb not only gives energy but also helps in curing constipation. It has also been noted that fo ti root stops excessive bleeding as well and keeps the menstrual cycle in order. Fo ti root also helps in boosting immune system which helps in fighting diseases and infections. Studies show that this herb has also been used to help treat vaginal discharge and also acts as a strong afrodisiac. Therefore, it can be said that fo ti root helps in maintaining the proper functioning of the heart, liver, lungs and brain in addition to boosting the urinary and reproduction system.

On the other hand fo ti root also has a few side effects which may include numbness in the arms and legs, allergic reactions such as rash and diarrhea too. Therefore, it is suggested that before using it, take advice from your health care expert.

For more information, go to: en.wikipedia.org