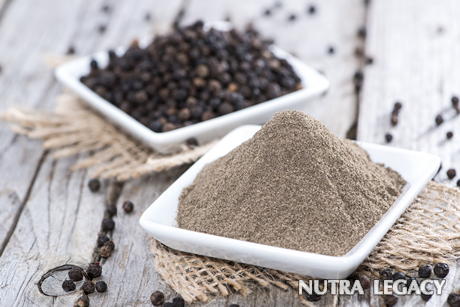 Bioperine is an extract taken from black pepper, which is actually a fruit known as Piper nigrum L or long pepper known as Piper longum L. Bipoerine is made up largely of piperine.

Black pepper is one of the most common household spices. However, black pepper has also been used as a medication, particularly in India. Ayurveda has used black pepper therapeutically for centuries as it was thought to be beneficial to the digestive tract and its proper functioning. Well over a half of all the traditional Ayurvedic formulas contained black pepper in their blend of ingredients.

Bioperine is extracted from the black pepper berries which are grown in southern India where the soil is nutrient-rich and damp. The fruit is taken in before in ripens. It is then sun-dried, a process which assures that the berries attain optimum quality and maturity. Bioperine, which is an extract of piperine is a patented substance and has been the subject of clinical testing in the USA. The main benefit of Bioperine is that it significantly increases the bioavailability of various other nutrients and supplements by improving absorption.

There are a number of reasons given in scientific research publications for the poor nutritional status of any subject population, but the central finding is often similar, and that is that poor nutrient bioavailability has a critical role to play in improving health and nutritional effectiveness. The most important factors in reducing the bioavailability of nutrients are factors that reduce the absorption capacity of the intestine. Many nutritionists agree that the barrier to better nutrition is that the absorption of nutrients in large sections of population is inefficient. The principle is that you can eat extremely nutritious food, but your body will only benefit from that food, if it can absorb the nutrients from it.

Bioperine has achieved patented status for its ability to increase the bioavailability of other nutrients. In addition, it is the only source of piperine that has been scrutinized in clinical trials to substantiate its efficacy and safety for supplemental and nutritional use.

Bioperine also enhances and increases the body’s natural process of thermogenesis. Thermogenesis is a metabolic process. It generates energy in the human body at the cellular level. It has been shown to be an important factor in the maintenance of weight loss. Thermogenesis also plays a central role in using the food and nutrients that food contains within the human body. After the ingestion of food, it initiates the processes that begin with digestion, and go on to gastrointestinal absorption. Bioperine contains a patented form of piperine which can enhance thermogenic activity naturally within the body. Bioperine is therefore known as a “thermonutrient”.

No Responses to “Bioperine Increases Process of Thermogenesis”