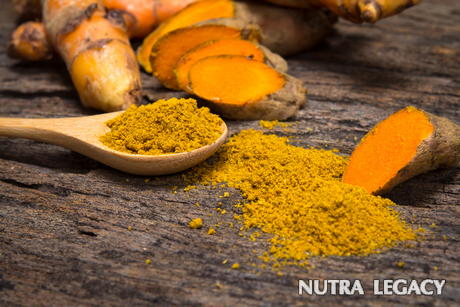 Turmeric (also known as Curcuma longa or simply curcumin) is a flowering perennial plant, a member of the ginger family widely used for food coloring and is one of the major ingredients in curry powder. Turmeric has a mild fragrance and a bitter, peppery and warm flavor. In the tropical regions of southern Asia, it grows from 3 to 5 feet and blossoms trumpet-shaped, yellow flowers. Turmeric is thought to be useful in both external and internal applications. The familiar yellow powder that is often used in food preparation comes from the roots of turmeric, which are dried and boiled. It gives ballpark mustard its bright yellow color.

Turmeric has been widely used for centuries as a condiment, healing remedy and textile dye. It is considered to be an anti-inflammatory and also treats liver problems and digestive disorders. Turmeric is also effective in the treatment of skin disorders and the healing of wounds. It is often used for the treatment of stomach problems that range from gastritis to stomach problems caused by stress and/or alcohol. It’s also proven that the turmeric breaks down the saturated fats in cholesterol, lowering cholesterol levels. Currently, studies are being conducted on the effectiveness of turmeric against cancer and liver disease.

Curcumin, like other substances in the turmeric, have antioxidant properties that are thought to be as strong as vitamins C and E. The antioxidants in turmeric protect the kidneys, liver, brain and lungs from the damage caused by drugs, radiation, alcohol, heavy metals like lead, or other chemicals like dry cleaning fluid. Today, turmeric (under the name Avea) is becoming popular as a treatment for depression.

Curcumin is one of the active ingredients in turmeric. According to multiple medical studies, it helps empty the gallbladder and stimulate the production of bile. Curcumin is also thought to have the ability to reduce inflammation, fight certain infections and to demonstrate a protective effect on the liver. The anti-inflammatory effects of curcumin have been known to be comparable to such potent drugs as hydrocortisone and phenylbutazone as well as anti-inflammatory agents such as Motrin.

Drugs are usually associated with significant toxic effects (decreased white blood cell count, intestinal bleeding), but curcumin does not produce this toxicity. Turmeric’s cholesterol-lowering effects are the result of curcumin action. Research has proven that curcumin plays the role of a messaging molecule that communicates with genes in the liver cells and directs them to raise the production of the mRNA (messenger proteins), which are responsible for the creation of receptors for low-density lipoprotein (LDL), or “bad” cholesterol. With more LDL receptors, the liver cells are able to clear more LDL cholesterol out of the body. As well as many other positive effects, curcumin is known to boost the activity of the immune system in Alzheimer’s patients, helping them clear the amyloid beta plaques characteristic of the disease. Curcumin is also known to be a very powerful antinociceptive (pain-relieving) agent. The effectiveness of turmeric in the reduction of joint inflammation has also been proven in many studies.

One Response to “Turmeric Benefits for Lowering Cholesterol Levels”