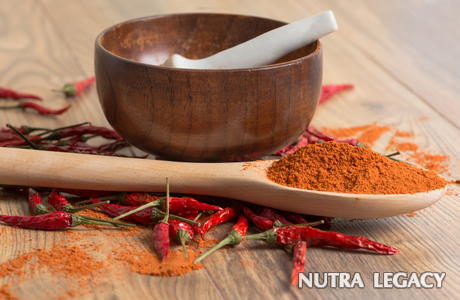 Cayenne pepper (also called Capsicum frutescens or Capsicum annuum) is a type of stimulating herb that is made from the dried pods of chili peppers. It is not only a well-known spice used in a great number of cooking recipes all over the world, but it also has been effectively used for medicinal purposes for thousands of years. The cayenne is quite often referred to as a chili (that is the cayenne pepper’s Aztec name). Cayenne is very high in potassium and calcium (both fight acid disease conditions in the body), as well as vitamins A, C, some B, and beta-carotene.

The actual name “cayenne” comes from a little town of that name in French Guiana on the northern coast of South America, where it was first found.

Cayenne pepper (ground and dried) has been used traditionally in medicine and cuisine around the world.
Cayenne is a member of the capsicum vegetables family, also known as chili peppers, which also includes bell peppers, eggplant, tomatoes and white potatoes. Capsaicin is an ingredient that provides pepper with its heat. It is considered that the hotter the pepper, the more capsaicin it contains. Capsaicin also relieves pain (it is an essential ingredient in many pain-relief products, especially ointments and creams) and decreases the stickiness of the platelet. Capsaicin is known for its beneficial effects on cholesterol, diabetes, heart disease, weight loss, lung congestion, and even cancer.

Nowadays, cayenne is a worldwide “medicine” used to help with a great variety of health conditions including heart disease, sore throats, allergies, stomachaches, toothaches and headaches, constipation, varicose veins, weak digestion, cramping and gas. It also serves as a great blood purifier and helps raise metabolism. This herb is one of the most useful to help poor circulation, form blood clots to heal external injuries, reduce inflammation, prevent ulcers and it is recommended to help stop internal bleeding.

Cayenne also acts as a catalyst, raising the effectiveness of other herbs and foods used with them. Cayenne also has a supportive and cleansing function for many systems of the body and organs. According to recent studies, cayenne can rebuild stomach tissues and help peristaltic action in the intestines. Known for a great number of its healing effects, cayenne is considered to be the most useful and valuable vegetable.

The cardiovascular benefits of the cayenne include:

• naturally lowers cholesterol and triglyceride levels, and platelet aggregation
• increasing the ability of the body to dissolve fibrin (a substance causing the formation of the blood clots)
• lowering the risk for stroke, heart attack and pulmonary embolism.

When applying the cayenne topically, it becomes a nerve irritant and distracts the body from pain by creating another signal for the nerves to send; thus it blocks pain signals. When used internally, cayenne plays a key role in helping cleanse the body. It helps to break down toxicity by relieving pain sources. It soothes the digestive track and promotes stomach secretion and saliva flow (these secretions contain special substances that help in the digestive process).