If you tend to steer clear from shellfish, shrimp and lobster because you’ve heard that they have high cholesterol levels, you are right and wrong at the same time. There really are high levels of dietary cholesterol in shrimp – 3 ounces of steamed shrimp contain 166 mg of cholesterol. However, saturated fat levels in shrimp are very low, and these are the fats mostly responsible for raising levels of blood cholesterol. 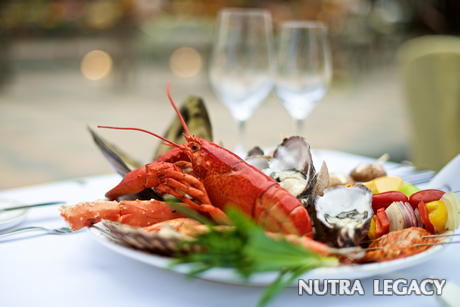 According to Harvard University researchers, eating a diet that is healthy for the heart and that includes shrimp does in fact make levels of cholesterol increase. However, eating shrimp increases both HDL (“good” cholesterol) and LDL (“bad” cholesterol) levels. The increases end up cancelling each other out, so there is actually no overall rise in cholesterol. But keep in mind that if you fry the shrimp, this would not be the case, since it would have high saturated fat levels. Your best bet is to eat steamed or grilled shrimp and avoid rich sauces as well.

So, even though physicians have always advised us to avoid shellfish, new research is changing the minds of many people. Shrimp cholesterol and lobster cholesterol are increasingly being found to be more beneficial than harmful, especially in the case of the latter. A 3-ounce serving of lobster has low calorie and saturated fat levels and also has the lowest cholesterol levels out of all crustaceans. It only has 61 mg of cholesterol compared with 166 for shrimp and 80 for crab.

It has also been discovered that saturated fats have a much higher impact on our blood cholesterol levels than the cholesterol contained in foods. In New York Rockefeller University researchers discovered that people who ate low saturated fat foods, including shrimp, had more balanced blood lipid ratios. So, shrimp definitely gets approved among dietary beneficial foods. This is also true for shrimp’s crustacean cousins, such as crab and lobster.

Even if you have high cholesterol levels, there is no need to be concerned about ingesting seafood and shellfish cholesterol. Just make sure to control your portion sizes. Seafood in general has relatively high levels of omega-3 fatty acids, which are actually known to reduce cholesterol levels that are created by the liver. The highest levels of cholesterol are contained in seafood items like beam, squid, and whiting. If you really want to avoid ingesting harmful cholesterol, it is best to have your seafood steamed, broiled, or grilled instead of fried.

Besides seafood there are many other sources of “good” HDL cholesterol, as well as other healthy elements. These include oatmeal, walnuts or nuts in general, and olive oil (which may even be drizzled over your shrimp or lobster).

For more information on seafood, go to:
en.wikipedia.org

One Response to “Shellfish Cholesterol Question: Should I Eat Lobster and Shrimp? – Updated Article”