In the last article we looked at various gourmet foods that while rich in flavor actually helped lower cholesterol. Now we will examine French gourmet foods in particular and how the French diet can actually promote better health. Despite eating rich satisfying foods, the French are able to maintain smaller waistlines than American by leading active lifestyles and easting slowly and in moderation. Keep these lifestyle habits in mind as you begin to add these foods to your diet. 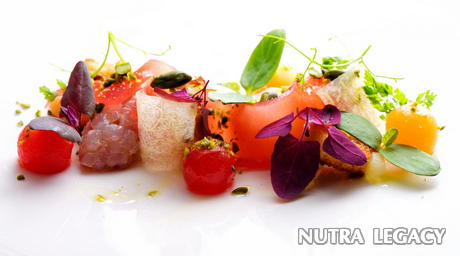 Believe it or not raw butter is much healthier than butter substitutes. Not only is it the most absorbable form of Vitamin A, it is also lecthin which assists in the metabolism of cholesterol. Raw butter contains conjugated linolenic acid (CLA)as well as other nutrients that protect against cancer. Think about that the next time you are standing at the supermarket and you think grabbing margarine is the best choice

Olive oil is a staple in the French diet. Studies have shown that people who consume more olive oil, rather than vegetable or canola oil, are often healthier and thinner. The monounsaturated fat in olive oil is resistant to oxidation and therefore reduces LDL (bad cholesterol) levels in the blood.

Bread is obviously a staple of the french diet, but who says that all baguettes are created equal. Whole grains provide a tremendous amount of fiber that can help you remove excess cholesterol from your body. As with everything, do not over eat, but a healthy dose of quality bread has been shown to lower cholesterol.

Of course who could forget wine! A glass of red wine a day has been shown to lower cholesterol levels. Red wine contains resveratrol which is associated with longevity. We are not suggesting a whole bottle, everything in moderation!

Nothing is more rich and delicious than a slice of camembert or brie on a fresh baguette. In small portions, these quality cheeses actually, while ultimately a source of cholesterol, it is much lower than many popular foods in the American diet such as cooked pork and red meat.

Unlike in America, Fish is a staple of the French diet. Often eaten several times a week, fish like salmon provide a healthy dose of omega-3 and other fish oils that lower cholesterol and protect against heart disease. Salmon and other fish, such as tuna, lower LDL (bad cholesterol) while raising HDL (good cholesterol). The French make these fish a regular part of their diet and you should too.

While many refer to the French diet as the “French Paradox” these foods listed above come from natural sources. The French do not eat sugary processed foods and prepackaged meals loaded with preservatives like Americans do. The also eat slower and in smaller portions. The foods they eat are often filling and so they snack less than the average American. All these lifestyle changes make it possible to eat these delicious foods and lower your cholesterol at the same time.