The Culture of Bullying Found in Med Schools

Bullying in medical school is a dirty little secret that the schools themselves simply don’t acknowledge. A survey found that as many as eighty five percent of medical students received some kind of bullying or abuse, typically in their third year of study. The abuse ran from being yelled at, to name calling as well as threats for lowered grades. Some abuse went as far as physical pushing, shoving and fights. 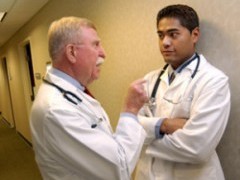 While it is known that becoming a doctor requires more than just the ability to diagnose and treat, it is also common knowledge that abuse of any sort does not result in any strength of character. The study indicated that much of the abuse could be reduced if not eliminated if medical schools simply admitted to the problem.