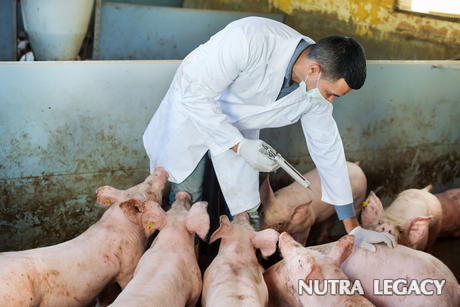 1. Flies from an American Pig Farm Located in Mexico

One version of the origins of the current swine flu panic has the location where the flu originated as a pig farm that is located in Mexico but is owned by a large American corporation called Smithfield Foods. The farm, named Granjas Carroll, and the parent corporation have faced multiple lawsuits over conditions present at the farm. Lagoons filled with feces are present, and this contributes to a horrid stench and much larger than usual numbers of flies. These flies may bite pigs infected with the swine flu and then bite humans, and they have the ability to transfer the flu infection in this way. Once humans were infected it did not take long for the virus to mutate, and the spread between humans became possible.

The current swine flu virus can be traced back to the swine flu that was detected in 1998 on a pig farm in North Carolina, at least partially. Out of the eight genetic components present in the current swine flu, six of these components can be traced directly back to the swine flu virus that was detected more than ten years ago. In the 1998 infection, all of the sows on the farm caught the swine flu and those which were pregnant aborted the litters. Nasal swabs were taken and shipped to the Animal Disease Diagnostic Lab in Raleigh, where scientists discovered a strain that had swine flu and human flu. Before the virus was done spreading and changing it had acquired the genetic material from two avian flu strains as well. Steven Salzberg, who works as a computational biologist at the University of Maryland, was one of the scientists doing research at the university who discovered that the newest H1N1 virus involves strains from some past swine viruses. These strains include the virus that infected large numbers of pig farms in 1998.

3. The State of Texas or The Country of Mexico

According to some reports by the Center For Disease Control, it is unsure whether the current version of the swine flu originated in Texas or in Mexico. With all of the traffic that crosses the border, both legal and illegal, it may never be known exactly where the first case started. Many workers cross the border legally every day, and have jobs in Texas. Because the flu was not immediately identified, the very first infection may never be located. One of the most frequently named origins for the current swine flu scare is the country of Mexico, because this is where the first flu infections were reported, and where most of the deaths from this flu has occurred. This origin is also commonly believed because of the number of deaths and the severity of the infection in this country is worse than in other places. Scientists are unsure yet why this is, but some speculate that the disease has been present in this country longer, so the number of people infected is higher than in other countries right now.

One of the theories concerning the origins of the current swine flu scare concerns the avian flu that affected Asian countries not too long ago. This is due in part to the fact that two of the eight genetic components of the current swine flu strain come from Asian and European pigs. Some have speculated that these swine were infected with the avian flu strain, and this is where the avian genetic material comes from.

5. Viral Mutations and Combinations in Pigs

Studies and research done at the University of Maryland, and the university based Prevention and Control of Avian Influenza Coordinated Agricultural Project, also known as AICAP, show that genetic mutations that occur under specific circumstances are responsible for the current swine flu. A pig that is exposed to both an avian flu virus and a human flu virus may show mutations and combinations of these viral genetic materials. When this happens, the mutation makes it easier for the combined virus strain to make the jump from only being transmitted by infected animals to humans to the transmission of the virus from one person to another. When this happens humans usually have no immunities to the new strain, and it can have devastating effects. Because pigs can catch all three flu types, they can often be the perfect incubators for new virus mutations and genetic combinations, and research at the university performed by Associate Professor Daniel Perez proves this theory out.