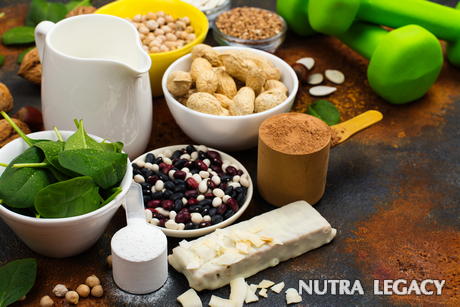 One common misconception is that a high protein vegetarian diet is not possible. However, there are a wide range of great sources of high protein diet foods that can work with a vegetarian diet. Below are ten of the ones you may never have thought of or considered.

While a common enough food, cottage cheese is actually a great choice for protein for vegetarians. It’s healthier than many other dairy products and if digesting it is a problem for you just add some yogurt, which is another good dairy product for your protein diet plans.

Skip the peanut butter next time you want an easy spread for sandwiches and celery. Instead, choose almond butter which is available in most natural food stores. Instead of peanuts, the butter is made from almonds. It’s a bit thicker and separates easily so stirring is required but the taste is very good.

Also known as garbanzo beans, chick peas are a good addition to any protein diet menu. If you don’t want to eat them plain, throw some into a food processor with some seasonings to make a tasty hummus spread.

Start off your high protein vegetarian diet with a bowl of Muesli and soy milk. Muesli comes from Switzerland and is made from rolled oats combined with fruit and nuts. Packaged versions of the cereal can be bought in most stores or you can find your own recipe online.

Edamame are soybeans still within their pods. They are commonly served alongside sushi. Soy products, in general, have high protein levels and edamame makes a great side dish for lots of main entrees.

This common Japanese food is actually a paste made from soybeans. It’s high in protein and makes an excellent base for soup hence the popular miso soup served in Asian restaurants. Combine the paste with water, some cubes of tofu (also high in protein), and green onions to make this traditional dish.

Tempeh originated in Indonesia but has become a popular choice in terms of high protein diet foods. It’s made from fermented soybeans. Slices can be cut off, fried or baked like meat, and served as a meat substitute in almost any dish. You can find this at many Asian grocery stores and some natural food markets.

This grain is one of the few complete proteins in that food group which makes it a great part of the protein diet menu. The texture is a bit crunchy and a little creamy when cooked. You can find some available at most health food stores. It can be served in a number of different ways, including as a soup ingredient or as a salad topper.

If you’re having trouble getting enough protein in your diet, add some spirulina. Spirulina comes from blue-green algae sold in flakes or as a powder. You can add this high protein product to smoothies, oatmeal, soy milk, or almost any other dish.

This uncommon meat substitute is a great source of protein. Unlike most meat substitutes, Seitan comes from grains not soybeans. You can make your own from wheat gluten or can buy it in some health food or vegan stores. A three ounce serving contains about 22 grams of protein.