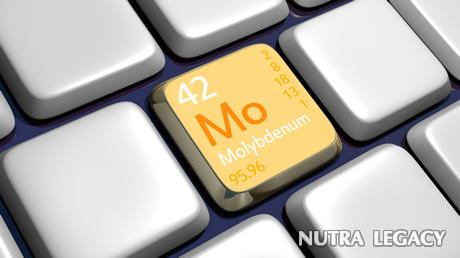 Molybdenum usually comes from Molybdenite (from the Ancient Greek word, “molybdos”, which means “lead”). Molybdenite is the principal ore from which molybdenum is extracted.

Molybdenum is a trace mineral which is needed in small amounts by the body. In a typical 150 lb (70kg) human body, there would be approximately 9.3 mg molybdenum, which is .00001% of the total body weight. Within the human body, molybdenum is present in the liver and kidneys in higher concentrations, and is present in the vertebrae in lower concentrations. Molybdenum can also be found in human tooth enamel. Lamb, beef liver and pork are all good sources of molybdenum as well as eggs, green beans, wheat flour, sunflower seeds, cereal grain, lentils, legumes and leafy vegetables.

Molybdenum is a constituent of a variety of enzymes, including sulfide oxide, and supports the metabolism of, xanthine oxide and sulfur amino acids. It also oxidates purines, and pyramidenes. The enzymes xanthin oxidase and alldehyde oxidase share a common molybdenum factor.

Molybdenum aids fat and carbohydrate metabolism, which in turn provides the body with energy and vigor. Molybdenum also assists with sulfur metabolism alcohol detoxification. It also has an antioxidant role in that it can aid the detoxification of cancer-causing chemicals known as free radicals. Free radicals are known to damage cell proteins and genetic material and leave the cell vulnerable to cancer. Free radicals are also thought to be partly responsible for the aging process as well as a variety of illnesses and conditions, including cancer. Antioxidants can help neutralize free radicals, and in doing so may limit or stop some of the damage they cause.

Molybdenum also helps to enhance healthy cell function, helps reduce tooth decay, and operates to activate an enzyme that produces uric acid. When you urinate, uric acid helps to take unneeded nitrogen out of the body.

Molybdenum deficiency is not usually seen in healthy individuals, but only in people with serious disorders, often due to metabolic defects which are associated with the absence of the three molybdenum enzymes. Deficiency in molybdenum can lead to metabolic disorders which can result in the abnormal excretion of sulfur metabolites (xanthine and hypothyroxine) and can lead to a low uric acid concentration.

Molybdenum toxicity is more likely to be seen than a deficiency. A common symptom of molybdenum toxicity is gout. It is also known that high molybdenum levels may cause copper deficiency symptoms, particularly in those with low copper levels. This is because high levels molybdenum can have an adverse impact on the absorption of copper. Similarly, molybdenum may be used to treat copper poisoning and is also used to correct improper carbohydrate metabolism.

Molybdenum has a role as an essential trace element in nearly all forms of life. It has a function as a cofactor for a number of enzymes. These enzymes act as a catalyst for crucial chemical transformations in the global nitrogen, sulfur and carbon cycles. Therefore enzymes which are dependent on molybdenum are not only important nutrients for human health, but also have an important role to play in the well being of the earth’s ecosystem.

One Response to “Molybdenum Aids Fat and Carbohydrate Metabolism”