Cheese is often derided as a fatty, unhealthy addition to sandwiches, pastas, and other meals, but not all cheeses clog the arteries. Here is a shortlist of a few cheeses that will add pizzazz to a meal or serve as a tasty snack without packing on the pounds.
1. Feta – Frequently found in Greek food, Feta is known for its low number of calories and fat, as well as its strong flavor that allows it to be used in moderation. A one ounce serving reportedly contains four grams of protein and only 74 calories. In addition, several types of Feta are made using goat or sheep’s milk, which may allow its consumption by people who are unable to tolerate cow’s milk. 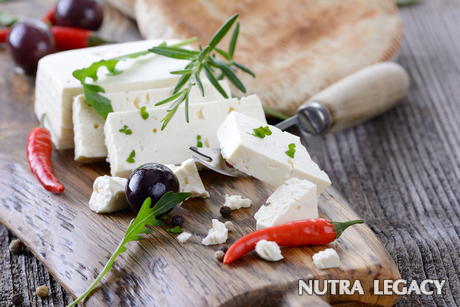 2. Ricotta – Made from whey instead of whole milk, soft Ricotta cheese, which is often used in baked pasta, can also be a healthy alternative to cream cheese. The whey means Ricotta is far less fatty than most other cheeses.

3. Gruyere – A hard cheese alternative to Swiss, Gruyere sports an intense flavor and all-natural processing. This cheese is low in sodium – only 94 milligrams an ounce – because regulations state that salt can only be added to its surface. It is also a good source of the vitamin K2, which was recently shown to have significant benefits in heart, brain, and bone health.

4. Cottage cheese – Known for its versatility, cottage cheese can enhance almost any snack. It is extremely low in calories, featuring only 20 calories per ounce. Though high in sodium, some companies produce no-salt versions of cottage cheese, making this a guilt-free, go-to cheese.
With these four healthy alternatives, calorie-counters can stop avoiding cheese like the plague, and start using cheese as a nutritional supplement to any balanced diet.