Are you part of the 50% of Americans hooked on beverages filled with sugar?

We are surrounded by sugary beverages and seem to have a love-hate relationship with them. The CDC (Center for Disease Control) has reported that Americans, from two years and older, have a fifty percentile figure when it comes to the consumption of these drinks. With the increase of childhood obesity, could there also be other factors involved in our daily glass of cola? 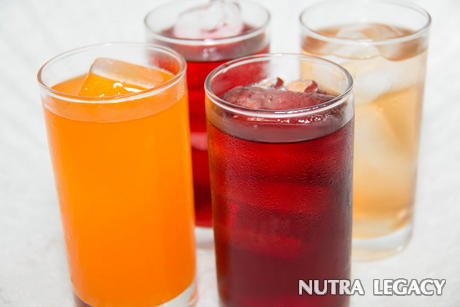 As a parent, we have the message pounded into us that natural fruit juice and water is better for our children than sugary drinks. When raising our son I made sure that we had very little sodas in the house and only 100% pure fruit juice. The problem? My son would come home and ask why we weren’t ‘normal’. Other parents had lots of sugary drinks in their house and we only had fruit juice.

According to the studies, many parents seem to view these drinks outside of what is considered part of food. Tolerance levels are loosened due to the fact that kids will buy these drinks whether at home, school or out and about. When you combine the more recent effects of lowered physical activity with the higher level of sugar intake, it becomes a recipe for diabetic disaster. Research results are being released that are showing that some of the children and young adults are exhibiting the same comparable artery wall thickness as those of a forty five year old man.

In the last year or so there have been changes in trends at the school level. Many school systems are refusing to serve the sugary drinks and instead offering bottled water, milk and one hundred percent fruit juices. The same type of choices is now showing up in airport food and drink kiosks.

The research on sugary drinks covered only one topic: sugar. It did not evaluate the amount or effect of caffeine. Many of the colas have high levels of caffeine and there is a newer popularity of some of the high caffeine energy drinks. There is an entire generation that chooses a large cola drink in the morning rather than the tradition coffee or tea. Caffeine is apparently playing a larger role in what we drink, sugared or not.

Another area of study that is currently being considered is the actual addictive quality of sugar. Research in France has uncovered a rather surprising result. Working with rats, they give the little critters the choice of cocaine or sugar. The rats choose the sugar every time. It seems there is a better reward factor from sugar than the high that they receive from the cocaine. Further study needs to be made on this topic, as there are large groups that are nay sayers about any addictive quality to sugar itself.

If we are going to get ourselves and our kids on a healthier track we need to begin backing away from the sugary drinks. As with anything, a small amount is fine, but as a nation we have gone overboard. The results are being seen in an increasing rise of overweight kids that are also suffering from diabetes at an earlier age.