Tuna is one of the most commonly caught and consumed fish in the world. Although farmed shrimp have surpassed tuna in popularity, National Geographic reports that over seven million tons of tuna are caught annually, making tuna an enormous industry. But concerned consumers should be aware of several factors weighing heavily on the practice of buying and eating tuna. 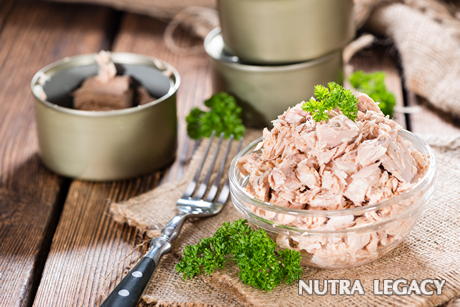 1. Mislabeling – An ocean protection group called Oceana recently conducted a genetic study of fish product that showed nearly 60% of tuna sold at restaurants and grocery stores is not actually tuna. This is in large part because many sushi restaurants mislabel different fish of the day as tuna.

2. Mercury content – Some species of tuna, such as Albacore, which makes up about 30% of tuna in the US (and are often labeled as “white meat“), are large, predatory fish. Their high rank on the food chain means that their consumption of smaller fish has loaded them with mercury, which could lead to food poisoning for unsuspecting consumers.

3. Bycatch – Methods for catching tuna are vastly imprecise, as both longlining and fish aggregating devices (FADs) – floating objects that attract tuna to fishing vessels – result in other, rarer species of tuna being caught. Up to 15% to 20% of fish caught by vessels using FADs are actually yellowfin and bigeye, which are both growing increasingly scarce in today’s environment.

4. Tuna pirates – Unregulated fishing in international waters is a problem that favors larger, more resourceful nations like Taiwan and the US. Small Pacific Island countries rely heavily on their tuna industries, yet the vessels of these “tuna pirates” invade the nearby waters of small countries like Kiribati and Tuvalu, purging their waters of this valuable aquatic commodity.

In order to combat these unfortunate realities of the tuna industry, health- and environmentally-conscious consumers can access online guides that detail where and how different restaurants and stores fish their tuna. Consumers are advised to purchase tuna sold by companies that use sustainable fishing methods fish from managed, un-pirated waters. If possible, larger, rarer species of tuna should be avoided due to mercury content and scarcity, respectively.