People have been using cosmetics throughout history, and in the past, they were derived from the colors and scents that nature offered. When we view the beautiful artwork of ancient Egypt we can see that women (and men) adorned themselves to accent their eyes and the flush of their cheeks. The purpose then was the same as it is now, to be attractive and appealing to each other; however the Egyptians also thought looking beautiful brought them closer to their gods. Our industrialized and sanitized world has altered our sources of cosmetics. Today, we look for our beauty in a box, container or bottle. Everything is mixed and created for us; much of which is actually not healthy for the skin or body. There has been a resurgence in the last ten years to return to nature for wellness, and this includes looking to our ancient ancestors for natural cosmetics. We can look to the Greeks for the origin of the word ‘cosmetics’ as it is derived from the word cosmos, meaning arrangement or order. 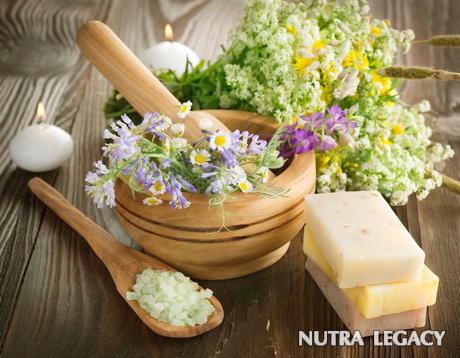 The Egyptians used a variety of natural resources for their cosmetics, many of which are still in use today. A trip to the middle east might bring a surprise when you find that women grow or have access to some of the natural plants and botanicals used for natural cosmetics. They would often use mineral composites as a baseline, and these can include: Lead carbonate; a white mineral with a structure of crystal. Kohl: mined and found at the Red Sea Coast and in Upper Egypt, it is made of galena which is a dark grey ore of lead/lead sulfide. Red ocre: a red clay. Malachite: Brought to the Nile Valley from the Sinai mountains it is copper green ore. Goose fat: used as a binder when creating cosmetic pastes like blush. Lapis Lazuli or Jasper: these are beautifully colored minerals, finely ground they are used as medicinal eye treatments. Burnt almonds: When blended with minerals they can add color to enhance the eye and brow area.

Studies of ancient Egyptian cosmetics found that they used the standard mortar and pestle to crush the various minerals, as long as an hour. Color and even crystals were added to create the finest of powders. So important were natural cosmetics that it has been found they had professionals in the industry to create variations in color and texture through heating and cooling processes and a variety of pigments and minerals for the pastes.

The Greco-Roman world also took great pride in their cosmetics. In these cultures, only women wore makeup and since their society was one based on appearance, cosmetics were of great importance. Some of the natural cosmetics that were preferred by these women included: Bears’ fat, used as a base wax for the addition of pigment. Ceruse: used to lighten the face, this is a white lead pigment. Sweat and dirt from sheep’s wool: comparable to what we might call lanolin; the paste was used as a base for the addition of pigment. Red ocre: a reddish clay that could be used alone on the cheeks and lips or mixed to create a paste. Soot from a fire: Mixed with animal fat and used to line the eyes. Saffron: A yellow-orange colored spice; although expensive, it was ground and used as eye shadow. Wine: the dregs were taken and applied to color the lips. Chalk: again to lighten or whiten the face, as a pale marble appearance was a sign of beauty.

While some of these may sound rather bizarre, you might be surprised at where the chemicals come from, that are in your own makeup bag.