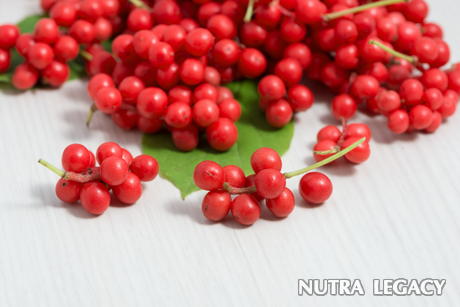 Schizandra is also known as the Magnolia Vine. It is a wall climbing shrub which grows in a wide variety of conditions and soil qualities. The plant is a native of China, Japan, Korea, Russia and other parts of Eastern Asia. It is the dried fruit of that the shrub produces that is used for medicinal purposes and as a dietary supplement.

The small, bright red berry of schizandra is known in Chinese medicine as “wu wei zi” which means “fruit with five flavors” because the fruit has the five basics flavors found in herbs used in Chinese medicine, namely, sweet, sour, salty, pungent (or spicy) and bitter. It was mentioned in early texts as a herb that was useful in promoting bodily vitality and overall well-being. The Chinese also believed that schizandra was useful for treating a lack of energy or for curing nervous exhaustion brought on by stress. Schizandra has a number of more specific functions in Chinese herbal medicine, and has been used to improve skin health, resist infection, treat coughs and has also been used to help cure insomnia. It was also thought to increase stamina, prevent tiredness and delay the onset of the aging process.

Schizandra was used in traditional Russian medicine as a cure for diabetes. Schizandra remains in use to this day in Russia as a medicine for difficulties with vision.

As with many Chinese herbal remedies, schizandra can be combined with other herbs to make treatments. For example, it can be combined with ginger, codonopsis pilosula, wormwood and buplerum to treat irritable bowel syndrome (IBS). There is however, currently no scientific evidence as to the effectiveness of this combination.

Research into the potential benefits of schizandra have been largely carried out in China. Research has shown that schizandra and other lignans can have a stimulating effect on the immune system and may also have a protective effect on the liver by protecting it from chemical damage. Schizandra lignans appear to protect the liver by activating the enzymes that produce glutathione. Glutathione is an antioxidant, and is known to protect cells from free radicals and other toxins. Lignans are chemicals similar to estrogen which act as antioxidants. Antioxidants are enzymes that can help to neutralize free radicals, and in doing so may limit or stop some of the cellular damage they can cause.

Schizandra has also found use as a tonic or adaptogen that is thought to assist in balancing bodily functions and improving the body’s ability to cope with stress. It is taken to strengthen the liver and kidneys, and to minimize the side effects of radiation and chemotherapy treatment, and is also taken to assist with recovery after surgery. Recent studies by Chinese scientists and others show that schizandra might improve aerobic capacity. Other studies show that schizandra might help to promote mental function in that it might assist with the processes of memory and learning. Schizandra may also have a positive effect on mood. Schizandra may also help to cure or prevent diarrhea, cold or a sore throat. There has also been scientific research which has shown that schizandra may assist people who suffer from chronic viral hepatitis.

Schizandra can be taken in powder form or as a liquid.