Blood Coagulation Factors: What Are They? 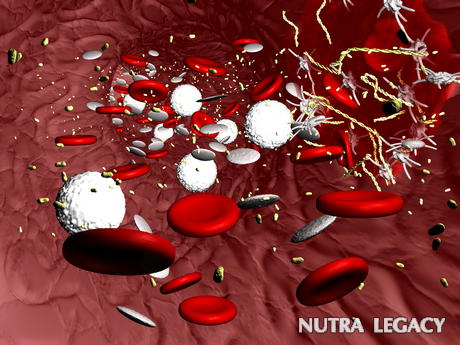 When you cut yourself, the wound bleeds. If that bleeding could not be stopped, you would eventually lose enough blood to cause physical problems for your body. That’s why blood clot formation is so critical to human health. Thanks to the combination of a number of different blood coagulation factors and other elements that wound will usually stop bleeding in minutes. But how does the process work? And what are these important factors that make it possible?

In the blood clotting process, there are two processes at work. The blood coagulation factors and blood proteins play important roles in the thrombin system. When bleeding occurs, the system starts to work and releases these chemicals into the bloodstream where they begin creating fibrin. This chemical is very sticky and starts attaching to the area around the wound so it can begin “catching” the red blood cells before they have a chance to escape.

Another important part of hemostasis (the medical term for blood clotting) is the platelet. Tiny platelets are produced in the bone marrow then enter the bloodstream to patrol for potential problems. If bleeding occurs, they become activated which means they become very sticky so they can cling together. They begin to attach themselves to the wall of the vein or artery where the wound appears so they can stop the bleeding.

Both of these parts of the blood clot formation process are important. The fibrin, for example, interacts with the platelets and tightens them to form a more effective seal on the wound.

Fourteen different blood coagulation factors are present in the body. Each plays a crucial role in the process described above. Some work to increase the activity level of the other factors while some of the factors help set off the chemical cascade which leads to the development of fibrin.

Tests can be done to determine how effective your body’s ability to handle blood clotting is. These tests look at the different amounts of these blood coagulation factors that are present. When amounts are in sufficient quantities, blood clotting is normal. However, if the levels of some or all of the factors are low this could indicate a serious problem.

Each of the factors has their own levels which should be present in the body. Different deficiency levels are a cause for concern with each of the factors. For example, if one factor is 5% lower than it should be that might be a problem while another factor could be 15% lower and not pose a concern.

Reduced levels of the blood coagulation factors needed for hemostasis can be inherited through genetics or can develop thanks to other diseases, including liver disease, some forms of cancer, and even some vitamin deficiencies. When certain factors are not sufficient, they may need to be replaced through blood transfusions or with a drug known as desmopressin. These procedures are done either when bleeding is occurring or is likely to occur (prior to surgery, for example).

2 Responses to “Blood Coagulation Factors: What Are They?”